The ankle joint is a hinged synovial joint with primarily up-and-down movement (plantarflexion and dorsiflexion). However, when the range of motion of the ankle and subtalar joints (talocalcaneal and talocalcaneonavicular) is taken together, the complex functions as a universal joint (see the image below).

Type I collagen tissue constitutes the bulk of the capsule and supporting ligaments of the ankle joint. The fiber density and orientation are arranged dynamically according to the typical mechanical stress experienced by the joint. Within limits, the greater the excursion of the joint capsule and ligaments, the less likely sprains are to occur. With increased motion, the muscles absorb the mechanical force energy without exceeding the tensile limits of either the joint capsule or the ligaments. 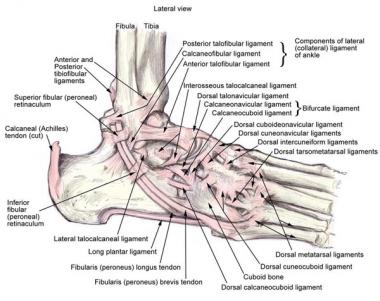 The lateral complex of ligaments has three components (see in the image below):

When referring to the anatomic subtalar (talocalcaneal) joint, the lateral complex is composed of the following four ligaments:

The CFL is cordlike and is thicker and stronger than the ATFL, and it runs from the tip of the lateral malleolus to the lateral aspect of the calcaneus directly below the fibula. The CFL prevents adduction and acts virtually independently in neutral and in dorsiflexed positions.

The ATFL has a lower load to failure than the CFL; that is, the maximum load to failure of the CFL is roughly 2-3.5 times greater than that for the ATFL. [1] However, the ATFL can undergo the greatest amount of deformation (strain) before failure and allows for internal rotation of the talus during plantarflexion, in contrast to the CFL and PTFL. The ATFL primarily restricts internal rotation of the talus in the mortise; when in plantarflexion, the ATFL also inhibits adduction.

The PTFL is the strongest of the three portions of the lateral ankle. It runs almost horizontally from the fossa in the inner aspect of the tip of the lateral malleolus to the posterior tubercle of the talus. The PTFL inhibits external rotation with the ankle in dorsiflexion. Note that medial ligaments are the primary restrictors of dorsiflexion (see the image below) and that the PTFL only assists in this function. The short fibers of the PTFL can also restrict internal rotation after rupture of the ATFL. After disruption of the CFL, the PTFL inhibits adduction with the ankle in dorsiflexion.

The deltoid ligament is divided into the following two portions (see the image below):

The superficial deltoid ligament originates from an anterior bony prominence of the medial malleolus referred to clinically as the anterior colliculus. The tibionavicular portion inserts onto the navicular and is the most anterior part; the tibiocalcaneal portion begins at the anterior colliculus and inserts onto the sustentaculum tali; and the final component of the superficial deltoid is the posterior tibiotalar ligament (PTTL).

The deep deltoid ligament originates from the intercollicular groove and a posterior bony prominence referred to clinically as the posterior colliculus. It is shorter and thicker than the superficial portion and is contiguous with the medial capsule of the ankle joint and the medial portion of the interosseous talocalcaneal ligament (IOL).

The greatest mechanical forces across the ankle joint are directed medially in the normal external rotation of the foot in walking and running. This is reflected in the strength and thickness of the deltoid ligament.

The syndesmosis of the ankle refers to the membrane connecting the tibia to the fibula. The tibia and fibula are connected throughout their length by an interosseous membrane. However, there are three definable ligaments at the ankle, as follows:

Biomechanically, a certain amount of motion is allowed in all planes with respect to the distal ends of the tibia and fibula. When the ankle goes from full plantarflexion to full dorsiflexion, the distance between the lateral and medial malleoli increases by approximately 1.5 mm. Rotation of the tibia on the talus can also occur while a person is walking. This rotation can be as much as 6°.

The AITF ligament provides approximately 35% of ankle stability; the deep PITF, 33%; the interosseous PITF, 22%; and the superficial PITF, 9%. [2] Ogilvie-Harris et al experimentally demonstrated the importance of the syndesmotic ligaments to ankle stability by sectioning the ligaments. [2] Rasmussen demonstrated that the ligaments of the syndesmosis play little role in the stability of the ankle as long as the other ligamentous structures are intact. [3] No study exists in which a purely ligamentous injury to the syndesmosis has been produced through externally applied stress (ie, external rotation and abduction). 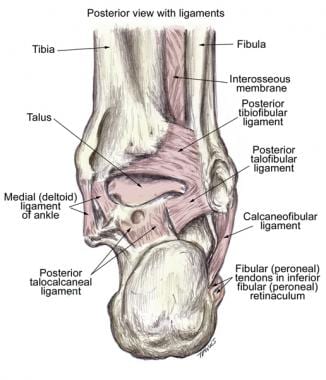 Posterior view of the ligaments of the ankle.

Harper categorized the ligamentous structures of the subtalar joint (talocalcaneal joint) in layers, as follows [4] :

From a biomechanical standpoint, the motion of the subtalar joint (talocalcaneal joint) is flexion-supination-adduction or extension-pronation-abduction. The motion occurs via talar ovoid surfaces moving over calcaneal ovoid surfaces.

These investigators’ findings emphasize the importance of the CFL in providing lateral stability to the subtalar joint (talocalcaneal joint). This conclusion is contrary to that of a study by Cass et al that demonstrated no such influence on subtalar motion. [7] The discrepancy among the studies may be explained by the variability of orientation of the CFL.

The previous sections described the natural anatomy and biomechanics of the lateral complex of ligaments, medial ligaments, ankle syndesmosis, and subtalar joint and ligament. However, there are also three primary anatomic variants, as identified by Trouilloud. These variants include the following [8] :

When the CFL is injured in a type A or C anatomic variant, increased subtalar motion is expected.