The normal human heart contains 4 valves that regulate blood flow into and out of the heart. The aortic and pulmonic valves are known as the semilunar valves, whereas the tricuspid and mitral valves are referred to as the atrioventricular valves. All the valves are trileaflet, with the exception of the mitral valve, which has 2 leaflets. Cardiac valves are surrounded by fibrous tissue forming partial or complete valvular rings, or annuli. These annuli join the fibrous skeleton of the heart to anchor and support the valvular structures.

In most cases, the orifices of the coronary arteries arise within the 2 anterior sinuses of Valsalva, usually positioned just below the sinotubular junction. [3, 4, 5] However, arteries can occasionally be positioned superior relative to the sinotubular junction. As a result of the semilunar attachment of the aortic valvar leaflets, 3 triangular extensions of the left ventricular outflow tract reach the level of the sinotubular junction. [6]  These triangles are formed of thinned fibrous walls of the aorta between the expanded sinuses of Valsalva. Their most apical regions represent areas of potential communication with the pericardial space and, in the case of the triangle between the right and left coronary aortic leaflets, with the plane of tissue interposed between the aorta and anteriorly located sleeve-like subpulmonary infundibulum. The 2 interleaflet triangles bordering the noncoronary leaflet are also in fibrous continuity with the fibrous trigones, the mitral valve, and the membranous septum.

The dextrosuperior and sinistroinferior cushions fuse and, in doing so, form the truncal septum. The truncal septum undergoes a complex process of differentiation, eventually forming the right and left aortic valve cusps and 2 leaflets of the pulmonic valve. Of the 2 intercalated endocardial cushions, the right cushion eventually forms the posterior aortic valve cusp, whereas the left forms the anterior pulmonic valve leaflet. This occurs during the counterclockwise rotation and caudal shift of the conotruncus. During this time, the endocardial cushions also undergo dedifferentiation from a myosin-heavy chain to an alpha-smooth muscle actin phenotype, resulting in mature arterial valvular leaflets. The improper fusion or the incomplete dedifferentiation of the previously mentioned endocardial cushions is thought to be responsible for the formation of anatomically and structurally congenitally abnormal aortic valves. [7, 8, 9]

The following image is an overview of the transitions occurring in early heart development in amniotes (see the image below). 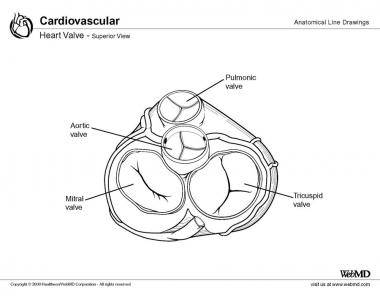 The aortic root is the direct continuation of the left ventricular outflow tract. It is located to the right and posterior, relative to the subpulmonary infundibulum, with its posterior margin wedged between the orifice of the mitral valve and the muscular ventricular septum extending from the basal attachment of the aortic valvar leaflets within the left ventricle to their peripheral attachment at the level of the sinotubular junction. [12]  Approximately two thirds of the circumference of the lower part of the aortic root is connected to the muscular ventricular septum, with the remaining one third in fibrous continuity with the aortic leaflet of the mitral valve. Its components include the sinuses of Valsalva, the fibrous interleaflet triangles, and the valvar leaflets themselves.

When defined literally, an “annulus” is no more than a little ring. The aortic valve annulus is a collagenous structure lying at the level of the junction of the aortic valve and the ventricular septum, usually a semilunar crownlike structure demarcated by the hinges of the leaflets. This serves to provide structural support to the aortic valve complex as it attaches to the aortic media distally and the membranous and muscular ventricular septum proximally and anteriorly. [13, 14]  The valvar leaflets are attached throughout the length of the root. Seen in 3 dimensions, therefore, the leaflets take the form of a 3-pronged coronet, with the hinges from the supporting ventricular structures forming the crownlike ring. The base of the crown is a virtual ring, formed by joining the basal attachment points of the leaflets within the left ventricle. This plane represents the inlet from the left ventricular outflow tract into the aortic root. The top of the crown is a true ring, the sinotubular junction, demarcated by the sinus ridge and the related sites of attachment of the peripheral zones of apposition between the aortic valve leaflets. It forms the outlet of the aortic root into the ascending aorta.

The larger part of the noncoronary leaflet of the valve, along with part of the left coronary leaflet, is in fibrous continuity with the aortic or anterior leaflet of the mitral valve, with the ends of this area of fibrous continuity being thickened to form the so-called fibrous trigones. These trigones anchor the aortic-mitral valvar unit to the roof of the left ventricle.

The hinge of the septal leaflet of the tricuspid valve separates the membranous septum into its atrioventricular and interventricular components (see the image below).

The extracellular components of these layers are primarily composed of collagen fibers arranged in a honeycomblike structure that serves to preserve the geometry of the collagen fibers under the hemodynamic stresses that the valve apparatus encounters. [14, 10] Within the extracellular matrix of the leaflets lie interstitial cells that are similar to smooth muscle cells and fibroblasts and that have been termed myofibroblasts. These cells are supplied oxygen via diffusion and a microvascular network.

Unicuspid aortic valve is a congenital valvular defect with an incidence of 0.02% in the general population. It is commonly associated with clinically significant aortic stenosis, usually manifesting during the third decade of life. All valves are unicommissural with the posterior commissural attachment. The free edge of the valve extends from the single commissure without further communication with the aorta. An estimated 50% of individuals with unicuspid aortic valve have associated ascending aortic dilatation. This is a rare cardiac anomaly but should be suspected in patients presenting at a young age with clinically significant aortic stenosis. [15, 17,18]

Bicuspid aortic valve is the most common congenital cardiac anomaly, occurring in 1-2% of the population, with a 2:1 male predominance. Evidence exists of familial clustering, with the incidence as high as 10% in some families. Bicuspid aortic valve may be clinically silent but can lead to early development of aortic stenosis or aortic insufficiency, most commonly in the fifth and sixth decades of life. Conditions associated with bicuspid aortic valve include patent ductus arteriosus, Williams syndrome, Turner syndrome, and coarctation of the aorta. Of clinical importance is the association of aortic root dilatation and ascending aortic aneurysm. [15, 19]

Quadricuspid aortic valve (QAV), first described in 1862 by Balington, is a rare congenital valvular abnormality that affects both the pulmonic and aortic valves in a 10:1 ratio. The incidence of QAV is estimated at 0.0125–0.033% in the general population. It most commonly occurs as an isolated defect but has been associated with patent ductus arteriosus, Ehlers-Danlos syndrome, hypertrophic obstructive cardiomyopathy, and subaortic stenosis. Aortic valvular insufficiency is commonly observed in QAV. It occurs secondary to a central orifice formed from malcoaptation of the 4 valvular leaflets. In a small case series, 56% of subjects with QAV had significant valvular insufficiency, with a mean age at presentation of 46 years. [20, 21]

Lambl’s excrescences are fine filamentous lesions of valvular leaflets. The incidence increases with age, and it is considered as a degenerative change on the surface of leaflets due to mechanical wear and tear. Aortic valve is commonly involved. Fine strands have acellular connective tissue cores with some elastic fibers. Multiple adjacent excrescences may stick together and grow up to large, complex form called “giant Lambl’s excrescence.” Whether the excrescences may serve as a nidus for bacterial growth or cause a systemic embolism is controversial. In echocardiography, it appears as very thin, delicate, lintlike mobile threads arising from the free borders or ventricular surfaces of aortic leaflets. It may be multiple and several centimeters long. Improving image quality increases identification of this lesion. The echocardiographic significance of Lambl’s excrescences lies in the differential diagnosis from the vegetation of infective endocarditis.