The bladder is an extraperitoneal muscular urine reservoir that lies behind the pubic symphysis in the pelvis. A normal bladder functions through a complex coordination of musculoskeletal, neurologic, and psychological functions that allow filling and emptying of the bladder contents. The prime effector of continence is the synergic relaxation of detrusor muscles and contraction of the bladder neck and pelvic floor muscles. This occurs during bladder filling and urine storage. See the image below. 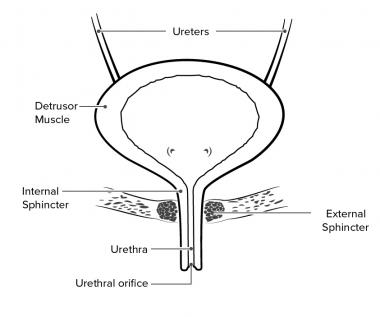 The adult bladder is located in the anterior pelvis and is enveloped by extraperitoneal fat and connective tissue. It is separated from the pubic symphysis by an anterior prevesical space known as the space of Retzius or retropubic space. The dome of the bladder is covered by peritoneum, and the bladder neck is fixed to neighboring structures by reflections of the pelvic fascia and by true ligaments of the pelvis.

The body of the bladder receives inferior support from the pelvic diaphragm in females or prostate in males and lateral support from the obturator internus and levator ani muscles. At its apex, the medial umbilical ligament, or the urachal remnant, courses along the anterior abdominal wall to the umbilicus. [2, 3] See the image below.

The arterial blood supply of the bladder arrives primarily via the internal iliac (hypogastric) arteries. These branch into the umbilical artery, which supplies several superior vesicle branches, and inferior vesical arteries, which come as direct internal iliac branches in males or from the vaginal arteries in females. The arterial supply of the bladder is also derived in part from the obturator artery and inferior gluteal artery. In females, this is via the uterine artery and vaginal artery. The venous return of the bladder is a rich network of vessels that generally parallels the arteries in both anatomic course and name. The vast majority of venous return from the bladder drains into the internal iliac vein.

Deep to the mucosa, there are 2 muscular layers in the trigone. The superficial layer connects to the longitudinal urethral musculature. The deep muscle layer fuses with the detrusor fibers. It also joins the Waldeyer sheaths or fibromuscular coverings of the intramural ureters. Here, the muscle fibers are longitudinal in orientation.

The bladder mucosa is transitional epithelium and is loosely connected to the muscular bladder wall by the lamina propria that serves as a connective-tissue layer. The bladder submucosa or lamina propria is rich in microvasculature and overlies the detrusor muscle. At the trigone, the epithelium is more densely adherent to the underlying muscle. A layer of fatty connective tissue covers most of the anterior and lateral bladder in the retropubic space and can be viewed cystoscopically in the case of a bladder perforation. The peritoneum covers the bladder posteriorly and separates it from the anterior cul-de-sac or vesicouterine pouch and abdominal cavity contents. A glycosaminoglycan layer coats the luminal surface of the bladder mucosa.

The clinical need for autologous tissue to replace or augment the urinary bladder is significant. Basic science work has led to the successful growth of urothelial and smooth muscle bladder grafts in the laboratory that have been implanted in clinical trials. [6] However, the viability and use of these tissues is often limited by a lacking lamina propria and the vascularity this provides. [7]  This makes the development of a true 3-layered replacement for bladder tissue containing not only urothelium and smooth muscle but also a robust lamina propria a necessary challenge. [8]Nonetheless, many techniques that may facilitate this are under investigation.