Bone marrow is the soft, spongy, gelatinous tissue found in the hollow spaces in the interior of bones. [1] The average weight of this tissue is about 4% of the total body weight, or 2.6 kg in an adult weighing 65 kg. Progenitor cell (stem cell) lines in the bone marrow produce new blood cells and stromal cells. Bone marrow is also an important part of the lymphatic system.

Bone marrow first appears in the clavicle near the end of fetal life and becomes active about 3 weeks later. Bone marrow supersedes the liver as the major hematopoietic organ at 32-36 weeks’ gestation. At birth, all bone marrow is red. With age, more and more of it is converted to the yellow type. In an adult, roughly half of the bone marrow is still red.

Red marrow is found mainly in the flat bones, such as the hip bone, sternum (breast) bone, skull, ribs, vertebrae, and shoulder blades, as well as in the metaphyseal and epiphyseal ends of the long bones, such as the femur, tibia, and humerus, where the bone is cancellous or spongy.

Yellow marrow is found in the hollow interior of the diaphyseal portion or the shaft of long bones. By the time a person reaches old age, nearly all of the red marrow is replaced by yellow marrow. However, the yellow marrow can revert to red if there is increased demand for red blood cells, such as in instances of blood loss.

As needed, the stem cells differentiate to become a particular kind of cell—a white blood cell, red blood cell, or platelet. Normally, only mature cells are released from the marrow into the bloodstream. 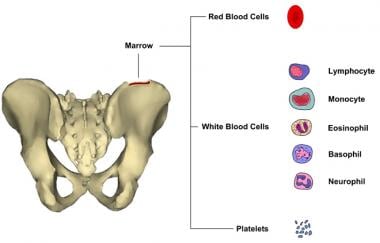 Illustration of the pelvis to show the site of bone marrow and blood cells derived from bone marrow.

Erythrocytes, granulocytes, monocytes, thrombocytes, and lymphocytes are all formed in the bone marrow. T lymphocytes originate via lymphoid stem cells that migrate to the thymus and differentiate under the influence of the thymic hormones thymopoietin and thymosin.

The stroma is not directly involved in the primary function of hematopoiesis, but it provides the microenvironment and colony-stimulating factors needed to facilitate hematopoiesis by the parenchymal cells.

There is biologic compartmentalization in the bone marrow, in that certain cell types tend to aggregate in specific areas. For instance, erythrocytes, macrophages, and their precursors tend to gather around blood vessels, while granulocytes gather at the borders of the bone marrow.

Bone marrow can be affected by pathologic states, such as malignancies, aplastic anemia, or infections such as tuberculosis, leading to a decrease in the production of blood cells and blood platelets. In addition the hematologic progenitor cells can turn malignant in the bone marrow, causing leukemias.

Bone marrow can be obtained for examination by bone marrow biopsy and bone marrow aspiration to identify and diagnose pathologic processes such as leukemia, multiple myeloma, anemia, and pancytopenia.

Bone marrow aspiration (seen in the image below) can be performed under local or general anesthesia. The site of aspiration is usually the iliac crest, as shown below, or the sternum. In children, the upper tibia can provide a good sample, because it still contains a substantial amount of red bone marrow. The average number of cells in a leg bone is about 440 billion. 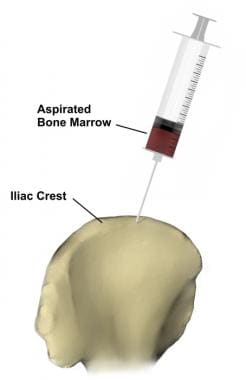 Illustration showing bone marrow aspiration from the iliac crest, a common site for this investigation.

Another option for evaluating bone marrow function is to administer certain drugs that stimulate the release of stem cells from the bone marrow into circulating blood. A blood sample is then obtained, and stem cells are isolated for microscopic examination. In newborns, stem cells may be retrieved from the umbilical cord.

Stem cells from blood and bone marrow donation are used to treat some cancers, such as leukemia, multiple myeloma, and lymphoma, as well as other diseases. [2]Hematopoietic stem cells from a donor who is histocompatible can be infused into another person or into the same person at a later time. These infused cells will then travel to the bone marrow and initiate blood cell production.

In some cases, in a patient with cancer, prior to the administration of radiation therapy or chemotherapy, some of the patient’s hematopoietic stem cells are harvested and later infused back into the patient when the therapy is finished, to restore the immune system.

A number of studies have now shown benefits of bone marrow–derived mesenchymal stem cells in enhancing fracture healing. It is not yet known whether these cells improve fracture healing directly by differentiating into osteoblasts, or indirectly by secreting paracrine factors that recruit blood vessels and the accompanying perivascular stem cells.

Bone marrow aspirated from the iliac crest contains these progenitor cells. These cells can be used in attempts to obtain bone healing in conditions associated with delayed or nonunion of a fracture in the bone.

Hernigou et al demonstrated that percutaneous autologous bone-marrow grafting was a potentially effective and safe method for the treatment of atrophic tibial diaphyseal nonunions. [3] Marrow was aspirated from both anterior iliac crests, concentrated on a cell separator, and then injected into 60 noninfected atrophic nonunions of the tibia. There was a positive correlation between the volume of mineralized callus at 4 months and the number and concentration of fibroblast colony-forming units in the graft. In the 7 patients who did not achieve union, both the concentration and the total number of stem cells injected were significantly lower than in the patients with osseous union.

One potential weakness of the study was the absence of a cohort with a placebo treatment. However, the success of the treatment of fracture nonunion with percutaneous bone-marrow grafting appeared to be dependent on the number and concentration of stem cells available for injection.