The cerebrum is the largest component of the brain. It is divided into right and left hemispheres. The corpus callosum is the collection of white matter fibers that joins these hemispheres.

Each of the cerebral hemispheres is further divided into 4 lobes: the frontal lobe, the parietal lobe, the temporal lobe, and the occipital lobe. The medial temporal lobe structures are considered by some to be part of the so-called limbic lobe. 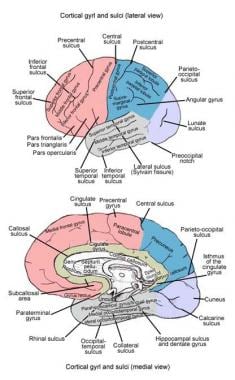 The outermost layer of the cerebrum is the cortex, which has a slightly gray appearance–hence the term “gray matter.” The cortex has a folded structure; each fold is termed a gyrus, while each groove between the folds is termed a sulcus. Cortical anatomy is discussed in greater detail below.

Below the cortex are axons, which are long fibers that emanate from and connect neurons. Axons are insulated by myelin, which increases the speed of conduction. Myelin is what gives the white appearance to these fibers of the brain–hence the term “white matter.”

The neocortex is the most phylogenetically developed structure of the human brain as compared with the brains of other species. The complex pattern of folding allows an increased cortical surface to occupy a smaller cranial volume. The pattern of folding that forms the sulcal and gyral patterns remains highly preserved across individuals. This enables a nomenclature for the cortical anatomy.

The left and right cerebral hemispheres are separated by the longitudinal cerebral fissure. The principal connection between the 2 hemispheres is the corpus callosum. Each cortical hemisphere can be divided into 4 lobes: frontal, temporal, parietal, and occipital. The frontal lobe can be distinguished from the temporal lobe by the lateral sulcus (Sylvian fissure). The frontal lobe can be distinguished from the parietal lobe by the central sulcus (Rolandic fissure). The parieto-occipital sulcus, which is visible on the medial aspect of the hemisphere, divides the parietal and occipital lobes. Within the lateral sulcus is another cortical surface referred to as the insula.

Evolutionarily, the brainstem is the most ancient part of the brain. Structurally, it can be divided into the medulla oblongata, pons, and midbrain. These three structures are briefly described below. Cross-sectional anatomy of the brainstem is rather complex, given the multiple traversing pathways and cranial nerve nuclei (see the image below). [1, 2, 3] 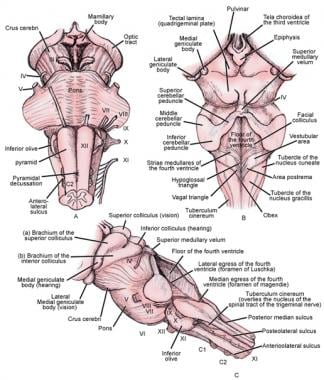 Dorsally, 2 pairs of protrusions are visible, which are the gracile tubercles medially and the cuneate tubercles just lateral to those. These represent the nuclei where sensory information from the dorsal columns is relayed onto thalamic projection neurons. Just superior to these protrusions is the floor of the fourth ventricle, which bears several characteristic impressions. The vagal trigone is the dorsal nucleus of the vagus nerve (cranial nerve X) and lies inferiorly, just below the hypoglossal trigone.

Superior to the medulla lies the pons, the ventral surface of which has a characteristic band of horizontal fibers. These fibers are the pontocerebellar fibers that are in turn projections from the corticopontine fibers. They cross to enter the contralateral middle cerebellar peduncle and thus enter the cerebellum.

On either side of the midline, there are bulges that are produced by the descending corticospinal tracts. At the pontomedullary junction, the 6th cranial nerve (abducens) can be seen exiting the brainstem. Laterally, but anterior to the middle cerebellar peduncle, the fifth cranial nerve (trigeminal) is seen exiting the brainstem. Below the middle cerebellar peduncle, the seventh and eighth cranial nerves (facial and vestibulocochlear) can be seen exiting. Dorsally, the pons forms the floor of the fourth ventricle.

The cerebellum occupies the posterior fossa, dorsal to the pons and medulla. It is involved primarily in modulating motor control to enable precisely coordinated body movements. Similar to the cerebrum, which has gyri and sulci, the cerebellum has finer folia and fissures that increase the surface area.

The cerebellum consists of 2 hemispheres, connected by a midline structure called the vermis. In contrast to the neocortex of the cerebrum, the cerebellar cortex has 3 layers: molecular, Purkinje, and granular. There are 4 deep cerebellar nuclei: the fastigial, globose, emboliform, and dentate nuclei, in sequence from medial to lateral. The afferent and efferent pathways to and from the cerebellum exist within the 3 cerebellar peduncles. 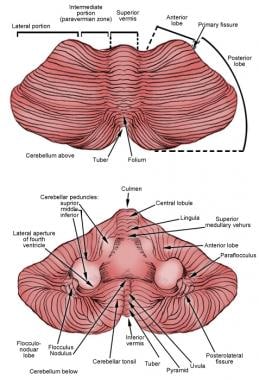 Top and anterior views of cerebellum. 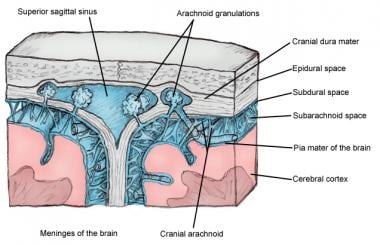 The innermost of the 3 layers is the pia mater, which tightly covers the brain itself, conforming to its grooves and folds. This layer is rich with blood vessels that descend into the brain.

The outermost meningeal layer is the dura mater, which lines the interior of the skull. The dura mater is composed of 2 individual layers, the meningeal dura and the periosteal dura. For the most part, these layers are fused; venous sinuses can be found in areas of separation. The tentorium cerebelli is a dura mater fold that separates the cerebellum from the cerebrum. The falx cerebri is a fold that separates the left and right cerebral hemispheres.

The brain is bathed in cerebrospinal fluid (CSF), which is continuously produced and absorbed. The ventricles are CSF-containing cavities within the brain. The structures that produce CSF are contained within the ventricles and are called the choroid plexuses. CSF is produced at a rate of about 450 mL/day, although at any given time about 150 mL can be found within the CSF spaces. Thus, the volume of CSF in most adults is turned over about 3 times per day. 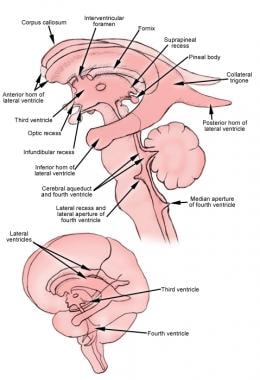 Venous return to the heart occurs through a combination of deep cerebral veins and superficial cortical veins. The veins then contribute to larger venous sinuses, which lie within the dura and ultimately drain through the internal jugular veins to the brachiocephalic veins and then into the superior vena cava.

The cellular structure of the brain is composed primarily of neurons and their support cells, which are broadly termed glial cells. The 3 principal types of glial cells are astrocytes, oligodendrocytes, and microglia. These glial cells can give rise to glial tumors, such as astrocytomas, oligodendrogliomas, and glioblastomas, which are among the most common primary brain tumors.

When examined histologically, the neurons of the cortical gray matter demonstrate a laminar pattern. The neocortex contains 6 distinct layers, in contrast to the evolutionarily older paleocortex and archicortex, which typically contain 3 layers. The specific cytoarchitectural patterns of the cortex are not uniform throughout the cerebral cortex, and their variation was mapped by the German physician Korbinian Brodmann and presented in 1909. The so-called Brodmann areas represent cytoarchitectural differences across different brain regions, and the numbering scheme developed by Brodmann is still used to refer to distinct areas of the cortex.[4]

White matter tracts connect both nearby and distal brain structures and can be distinguished according to the types of connections they mediate.

Our current understanding of functional localization in the cortex (see the image below) is derived from several sources, which include insights from patients with lesions involving specific areas of the cortex, awake mapping of the cortex during brain surgery, and functional imaging studies such as functional magnetic resonance imaging (MRI) and positron emission tomography (PET) in healthy volunteers.

Some of the earliest contributions to modern language mapping can be traced to the work of neurologist Paul Broca, who studied the language deficits in patients with stroke. Broca’s area, as it is termed, is a region of the frontal operculum, which also overlaps with Brodmann area 44 and 45. Three overlapping names describe this region, which is responsible for speech production. Selective damage to this region leads to difficulty speaking but typically with preserved comprehension.

In contrast, Wernicke’s area refers to the posterior aspect of the superior temporal gyrus, which overlaps with Brodmann area 22. This region is generally responsible for speech comprehension, and selective injury to it can lead to impaired understanding with preserved speech production.