Conduction System of the Heart

The conducting system of the heart consists of cardiac muscle cells and conducting fibers (not nervous tissue) that are specialized for initiating impulses and conducting them rapidly through the heart (see the image below). They initiate the normal cardiac cycle and coordinate the contractions of cardiac chambers. Both atria contract together, as do the ventricles, but atrial contraction occurs first.

The conducting system provides the heart its automatic rhythmic beat. For the heart to pump efficiently and the systemic and pulmonary circulations to operate in synchrony, the events in the cardiac cycle must be coordinated. [1, 2] 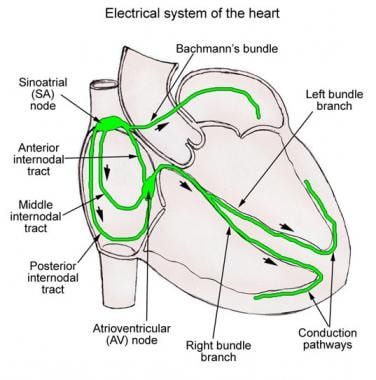 Innervation of the AV node, His bundle, and ventricular myocardium

The AV node and His bundle are innervated by a rich supply of cholinergic and adrenergic fibers with higher densities as compared with the ventricular myocardium. Parasympathetic nerves to the AV node region enter the heart at the junction of the IVC and the inferior aspect of the LA, adjacent to the coronary sinus ostium.

The autonomic neural input to the heart demonstrates some degree of “sidedness,” with the right sympathetic and vagal nerves affecting the SA node more than the AV node and the left sympathetic and vagal nerves affecting the AV node more than the SA node. The distribution of the neural input to the SA and AV nodes is complex because of substantial overlapping innervation.

The right vagus nerve primarily innervates the sinoatrial (SA) node, whereas the left vagus innervates the atrioventricular (AV) node; however, significant overlap can exist in the anatomic distribution.

Stimulation of sympathetic ganglia shortens the refractory period equally in the epicardium and underlying endocardium of the left ventricular free wall, although dispersion of recovery properties occurs (ie, different degrees of shortening of refractoriness occur) when measured at different epicardial sites. Nonuniform distribution of norepinephrine (NE) may, in part, contribute to some of the nonuniform electrophysiologic effects, because the ventricular content of NE is greater at the base than at the apex of the heart, with greater distribution to muscle than to Purkinje fibers. Afferent vagal activity appears to be higher in the posterior ventricular myocardium, which may account for the vagomimetic effects of inferior myocardial infarction. [4, 8]

The normal sinus rate of 60-100 beat/min at rest is affected by several factors including autonomic nervous system input, medications, metabolic and electrolyte status, and pathological conditions. [9]

Etiologies of sinus node and atrioventricular node dysfunction are as follows:

Inherited forms of cardiac conduction disease are rare, however, the discovery of causative genetic mutations has enhanced our understanding of the processes underlying impulse generation and propagation.

Alterations in vagal and sympathetic innervation can influence the development of arrhythmias and sudden cardiac death due to ventricular tachyarrhythmias. Cardioneuropathy may develop due to damage to the nerves extrinsic to the heart, such as the stellate ganglia, as well as to intrinsic cardiac nerves from diseases that may affect primarily nerves, such as viral infections or, secondarily, from diseases that cause cardiac damage. Such neural changes may create electrical instability through various electrophysiologic mechanisms. For example, myocardial infarctioncan interrupt afferent and efferent neural transmission and create areas of sympathetic supersensitivity that may be conducive to the development of arrhythmias. [4