These 3 articulations, forming 2 different aspects, allow flexion and extension of the elbow, as well as supination and pronation of the forearm and wrist at the elbow. When the elbow is in anatomic position, the long axis of the forearm typically has an offset (lateral inclination or valgus at the elbow) of about 19 º from the long axis of the humerus. [2] This angle shows no difference between genders but does increase slightly with age into adulthood. [3]

The elbow joint is composed of the distal end of the humerus and the proximal ends of the radius and the ulna (see the images below). 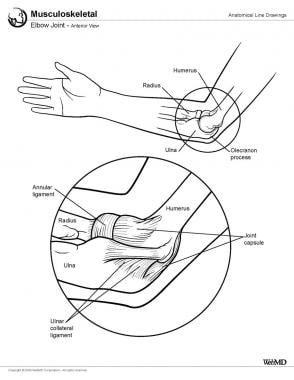 On the central aspect of the posterior humerus above the trochlea of the humeral condyle is the olecranon fossa, which allows the humerus to accept the olecranon of the ulna when in extension. The olecranon is the proximal end of the ulna, from which the C-shaped trochlea notch is carved.

Lateral to the humeral condyle are the medial and lateral epicondyles, and superior to those on their respective sides are the medial and lateral supracondylar ridges. The epicondyles and supracondylar ridges act as attachment sites of for ligamentous supporting structures of the elbow, as well as for muscles that cross and act on the elbow joint.

The ulna contributes the articular cartilage–covered trochlear notch to the hinge of the elbow joint, which is carved out of the olecranon process at the proximal end of the ulna. The olecranon posteriorly acts as an insertion point for muscles crossing the elbow joint. Anteriorly, the anteroinferior portion of the C shape created by the trochlear notch culminates in a blunt central point called the coronoid process.

Many disorders may occur at the elbow. Any of the bones can be fractured, any of the muscles can be pulled, any of the tendons can be injured, and any of the ligaments can be sprained. Additionally, injuries more proximally in the arm may influence actions at the elbow and leave deficits in function or sensation at the elbow even if the joint itself is intact. Some common pathologic conditions of the elbow are discussed below.

Dislocation of the radial head (“pulled elbow”) occurs when a distraction force is applied along the long axis of the forearm from a point distal to the elbow. As a consequence, the head of the radius can be pulled out of the anular ligament that holds it in place.

Typically these injuries occur in young children, often girls. The classic description of the injury involves a parent or other adult figure lifting a child up vertically by a single hand. The child then holds the arm flexed at the elbow and pronated at the forearm. Reduction of the dislocation can be performed by supinating the forearm with the elbow flexed.

Lateral epicondylitis (“tennis elbow”) involves inflammation of the tendons that insert into the common extensor origin at the lateral epicondyle of the humerus. Repetitive extension movements at the wrist cause an overuse syndrome of the wrist extensors and pain at the aforementioned insertion just superior to the elbow. Generally, damage to the extensor carpi radialis brevis is the chief culprit, with the overuse also causing weakness. Treatment is aimed at decreasing inflammation and strengthening the wrist extensors.

Medial epicondylitis (“golfer’s elbow”) is an inflammatory condition of the tendons that insert into the common flexor origin at the medial epicondyle of the humerus. Repetitive flexion movements at the wrist cause an overuse syndrome of the wrist flexors and pain at the aforementioned insertion just superior to the elbow. The condition is most common among men age 20-49 but can be experienced by anyone. Treatment is aimed at decreasing inflammation and strengthening the wrist extensors. [8]

Because the nerve has very little padding as it passes through this area, it is easily compressed, and the compression causes a neurapraxia of the ulnar nerve and, ultimately, paresthesias. Treatment is aimed at relieving pressure on the nerve and decreasing inflammation, if present.

Pronator syndrome is a compression neuropathy of the median nerve as it passes between the 2 heads of the pronator teres muscle. The syndrome can cause paresthesias in the distribution of the median nerve distal to the compression and may lead to weakness in the flexor pollicis longus, the flexor digitorum profundus laterally, and the pronator quadratus. Generally, the pronator teres itself is unaffected, because it is already innervated before the passage of the nerve between the 2 heads of the muscle.