The esophagus is a 25-cm long muscular tube that connects the pharynx to the stomach. [1] The length of the esophagus at birth varies between 8 and 10 cm and measures about 19 cm at age 15 years. [2]

In its vertical course, the esophagus has 2 gentle curves in the coronal plane. The first curve begins a little below the commencement of the esophagus and inclines to the left as far as the root of the neck and returns to the midline at the level of fifth thoracic vertebra. The second curve to the left is formed as the esophagus bends to cross the descending thoracic aorta, before it pierces the diaphragm. The esophagus also has anteroposterior curvatures that correspond to the curvatures of the cervical and thoracic part of the vertebral column. [1, 2]

The video below depicts the esophagus as viewed through an esophagoscope in a 3-year-old child.

The image below depicts the esophageal musculature. 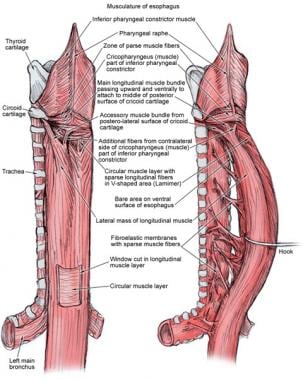 Musculature of the esophagus.

Histologically, the esophagus has the following 4 concentric layers (see the image below) [3] :

The proximal one-third of the esophagus consists primarily of striated muscle. Smooth muscle predominates in the distal portion. [3]

The fourth and the outermost fibrous layer is formed by external adventitia of irregular, dense connective tissue containing many elastic fibers.

The most common congenital anomalies of the esophagus are esophageal atresia and tracheoesophageal fistula. The cause of esophageal atresia is thought to be a failure of the esophageal endoderm to proliferate rapidly during the fifth week to keep up with the elongation of the embryo. The cause for tracheoesophageal fistula and why the 2 defects are usually found together is related to the fact that the respiratory diverticulum buds anteriorly from the cranial foregut and is therefore intimately related to esophageal development. [4]

Congenital esophageal mucosal webs or muscular hypertrophy can cause symptomatic narrowing of the esophagus. Esophageal duplication can take many forms and may manifest as a neck mass or dysphagia. Dysphagia lusoria is induced by vascular anomalies involving the aortic root.