The female urethra is a relatively simple tubular structure that has the sole purpose of conducting urine from the bladder to the outside of the body. It is a short structure without complex investing structures; thus, it is less prone to intrinsic pathology than the male urethra is. Nevertheless, understanding the anatomy of the female urethra and its relations is critical in understanding the common clinical problems of stress urinary incontinence and urinary tract infection.

The developed female urethra is a 4-cm tubular structure that begins at the bladder neck and terminates at the vaginal vestibule (see the image below). It is a richly vascular spongy cylinder and is designed to provide continence. 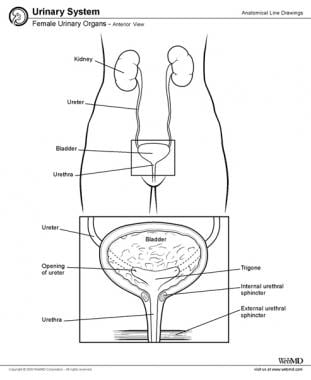 The female urethra is suspended by the urethropelvic ligament with its 2 sides (the abdominal side being the endopelvic fascia and the vaginal side being the periurethral fascia). The female urethra pierces the pelvic diaphragm and the perineal membrane just posterior to the pubic symphysis. Distally, it exhibits more genital characteristics, becoming rich in glands and developing a squamous epithelium.

The striated external urethral sphincter (compressor urethrae) is in the distal two thirds of the urethra and is composed of type I (slow-twitch) muscle fibers. This sphincter, like the male rhabdosphincter, is horseshoe-shaped and is posteriorly deficient. Distally, the sphincter fans out laterally along the inferior border of the pubic rami. It is fixed against the anterior vaginal wall. This arrangement is critical for urinary continence.

Near the vestibule lies the urethrovaginal sphincter, which contracts with the bulbospongiosus muscle and tightens the urogenital hiatus (see the image below). Distally, the female urethra is suspended by the suspensory ligament of the clitoris and the pubovesical ligament. It is this hammock, or sling, of fascial attachments that suspends the urethra beneath the pubis.

The female urethra is a multilayered tube lined by transitional cell epithelium proximally and by nonkeratinizing stratified squamous epithelium distally.

Numerous mucus glands are present in the middle to distal urethra, the most prominent of which are the paraurethral (Skene) glands, which empty via 2 paired ducts on either side of the external urethral meatus. A thick vascular lamina propria with periurethral glands is noted.

The highly vascular and estrogen-dependent submucosa contributes a large percentage of the urethral closing pressure; accordingly, hormone withdrawal can lead to stress incontinence. The submucosa is surrounded by a longitudinal smooth muscle layer and then by a thicker circular smooth muscle layer (the involuntary internal urethral sphincter). Surrounding these layers in the middle and distal urethra is a striated muscle sphincter (the voluntary external urethral sphincter)

Although the female urethra is subject to variations in length and to angulation, no common natural variants are noted in female urethral anatomy. Pathophysiologic variants include persistence of the urogenital sinus, labial fusion, and urethral prolapse.

Management includes workup for disorders of sexual differentiation, particularly congenital adrenal hyperplasia, which accounts for many cases of persistent urogenital sinus. Ultrasonography should be performed to examine the urogenital viscera. Cloacal anomalies are associated with vertebral anomalies; consequently, a careful examination of the back must be performed. Genitography and endoscopy should be performed to elucidate the anatomy before reconstruction. [4]

Labial fusion, although not a truly urethral phenomenon, is common in young girls and may lead to urine pooling in the vagina and postvoid dribbling. Additionally, urinalysis cannot be accurately performed in the setting of labial fusion. Lysis of the adhesions and topical application of estrogens are the treatments of choice. [5]

Urethral prolapse is a complete circumferential eversion of the urethral mucosa from the external urethral meatus. It typically occurs in prepubertal black girls and may be managed with conservative measures such as topical steroids and Sitz baths; however, recurrence rates are high, and surgical management is often necessary.