The kidneys are paired retroperitoneal structures that are normally located between the transverse processes of T12-L3 vertebrae, with the left kidney typically somewhat more superior in position than the right. The upper poles are normally oriented more medially and posteriorly than the lower poles.

The kidneys serve important functions, including filtration and excretion of metabolic waste products (urea and ammonium); regulation of necessary electrolytes, fluid, and acid-base balance; and stimulation of red blood cell production. They also serve to regulate blood pressure via the renin-angiotensin-aldosterone system, controlling reabsorption of water and maintaining intravascular volume. The kidneys also reabsorb glucose and amino acids and have hormonal functions via erythropoietin, calcitriol, and vitamin D activation. [1]

The kidney anatomy is shown in the image below. 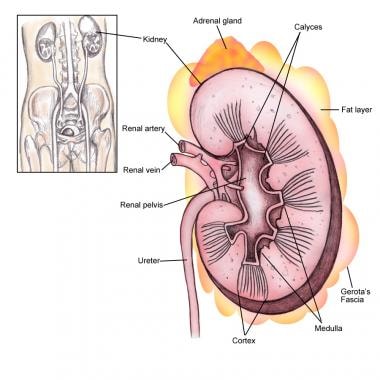 The relationship of neighboring organs to the kidneys is important, as described below:

The kidney is divided into the cortex and medulla. Renal pyramids in the medullary areas are separated by the cortical tissue called renal columns (of Bertin).

The functional renal unit is the nephron, which is composed of the following:

Blood from the afferent glomerular arteriole passes through the juxtamedullary apparatus to the glomerulus. The glomerulus is a network of capillaries that filters blood across Bowman capsule into the proximal convoluted tubule.

The glomerulus contains podocytes and a basement membrane allowing water and certain solutes to be filtered across. This filtrate then reaches the PCT, which reabsorbs glucose and various electrolytes along with water as the filtrate passes through. Meanwhile, after being filtered at the glomerulus, the blood passes into the efferent glomerular arteriole and then descends into the renal pyramid (see the images below).

Anatomic variations in the renal vasculature occur in approximately 25-40% of patients. [2]

Supernumerary, or accessory, renal arteries are the most common arterial variation, with most of these branches supplying the lower pole of the kidney. They may pass anterior to the inferior vena cava (IVC) and over the ureteropelvic junction and be associated with (or cause) obstruction of the ureteropelvic junction (UPJ). Persistence of the right subcardinal vein anterior to the ureter can lead to a retrocaval ureter, which can also cause obstruction. [5]

The retro-aortic left renal vein (RLRV) is a malformation characterized by the presence of a vessel that drains the left renal blood up to the inferior vena cava crossing behind the aorta. The incidence varies between 1.7-2.5%, depending on series. It has surgical implications in renal surgery (ie, donor nephrectomy) more than clinical manifestations, although some authors have linked this to varicocele formation. [6]

Kidney position in the retroperitoneum is subject to variation as well. A kidney may be in an ectopic location, such as the pelvis, when it doesn’t ascend properly, or it can be malrotated or fused (as in horseshoe kidneys, in which the inferior poles are fused, causing a U-shaped configuration).

In some fusion anomalies, such as crossed-fused ectopia, the 2 kidneys may be located on the same side. Although some of these variations may be associated with pathological conditions, such as hydronephrosis and UPJ obstruction, they can also remain completely asymptomatic and undiscovered until a diagnosis is made by radiographic study.

Importantly, in an ectopic kidney, the adrenals should still be in the superior portion of the posterior peritoneum, since their embryologic origin is different from that of the kidneys.

Variants may also exist in the collecting system drainage. Duplication anomalies may develop, wherein more than a single collecting system may form and drain separately into the bladder (complete duplication) or join at some point proximally before draining into a single orifice into the urinary bladder (partial duplication). In a complete duplicated system, the upper pole moiety drains inferomedially into the bladder, and the lower pole moiety drains superolaterally, as described by the Weigert-Meyer rule. [7]

Crossing vessel, ureteropelvic junction (UPJ) obstruction, or vesicoureteral reflux can become pathophysiologic if it causes extrinsic or primary intrinsic obstruction leading to hydronephrosis. This can be seen with aberrant crossing vessels in a single system, which leads to UPJ obstruction. Obstruction can also occur from an ectopic ureter, where it is commonly seen inserting inferomedially in an abnormal location (ie, bladder neck) and is often associated with the upper pole moiety of a complete duplicated collecting system.

Similarly, a ureterocele in a single system, or sometimes seen in a complete duplicated system, can cause obstruction. From an intrinsic standpoint, UPJO can also be caused by an adynamic/aperistaltic segment of ureter that is due to abnormal embryologic development. Secondary etiologies of obstruction include stones, infections, iatrogenic ureteral damage causing strictures, and other acquired factors that are not due to anatomic variants.

Vesicoureteral reflux is another variation and is caused by an abnormal insertion of the ureter in the bladder in an abnormal position (usually superolateral). This insertion site leads to a shorter intramural tunnel length for the ureter to pass through the bladder wall, which leads to inadequate compression of the ureter during bladder filling and contraction and may allow reflux of urine up the ureter. Vesicoureteral reflux can contribute to pyelonephritis and, in extreme situations, irreversible damage to an affected renal unit.

Imaging Techniques for the Kidney

KUB (kidney, ureter, bladder) is the proper terminology for a radiograph of the abdomen when used to view the urinary tract. The outline of kidneys can usually be seen. Ureters usually are not visible. The most common pathological findings are urinary tract stones. [9] See the image below.

When considering surgical approaches to the kidney, understanding the benefits, risks, and complications of each approach is paramount. The kidneys are retroperitoneal organs and, therefore, during an open surgery, one may choose to use an extraperitoneal flank approach, incising over the 11th-12th rib, plus or minus rib excision and staying retroperitoneally. This is particularly useful in obese patients, but not in patients with severe scoliosis or cardiorespiratory disorders, and provides direct access to the retroperitoneal space without traversing the peritoneal cavity.

In the dorsal lumbotomy approach (which currently is rarely used in urologic surgery except in pediatric pyeloplasties for ureteropelvic junction repair), the patient is placed in a prone position, and a smaller muscle-sparing incision is made posteriorly without rib resection. It also provides a direct, retroperitoneal approach with a smaller incision but may be technically limiting in surgical exposure in larger patients and with differing pathology.

The transabdominal approach is performed with the patient lying supine and making either a subcostal or midline incision to traverse the peritoneum or reach the retroperitoneum. The renal pedicle is approached more directly using this technique, which is ideally suited to large and complex tumors or trauma, as the vessels can be approached quite proximally to establish early vascular control. Potential complications of the approach include postoperative ileus and future adhesion formation.

The thoracoabdominal approach involves a lengthy incision over the chest wall and abdomen over the operative site. This approach is most often used for large tumors in radical nephrectomy, especially for those in the upper pole. Its disadvantages are increased pain and longer hospital stay and convalescence, as well as potential injury to the parietal pleura necessitating a thoracostomy tube. [11]

From a minimally invasive perspective, laparoscopic and robotic-assisted laparoscopic approaches have been used for nearly all renal procedures, typically with reduced morbidity (primarily decreased postoperative pain and faster return to normal activity) when compared with open surgical techniques. Both transperitoneal and direct retroperitoneal approaches have been used and well described in the literature, and each has benefits and drawbacks to consider.

Laparoscopic procedures can be broken down into the following 3 categories: